So, you have finally grown tired of the effect of external vibrations and slippage on the sanctity of your listening experience, of the hauntological effect of listening to music through vinyl’s various antiquated shortcomings?

Or, perhaps you simply came by to see what all the commotion is about, to validate or research something some of your record collecting buddies have been going on and on about?

Whatever your reason for being here, let me welcome you all along as we attempt to elucidate in full for you just what a record clamp is, why it exists, and how it can be of esteemed benefit to you and your listening experience.

What is a Record Clamp?

At its simplest and easiest to understand, a record clamp is a device that attempts to weigh down the record in question down during playback, so as to stabilise the disc while it is being operated and emitted through the stereo system.

Though there are certainly a whole host of different products of this variety under a variety of different names, they all more or less do – or attempt to do – the same thing, as elucidated above. 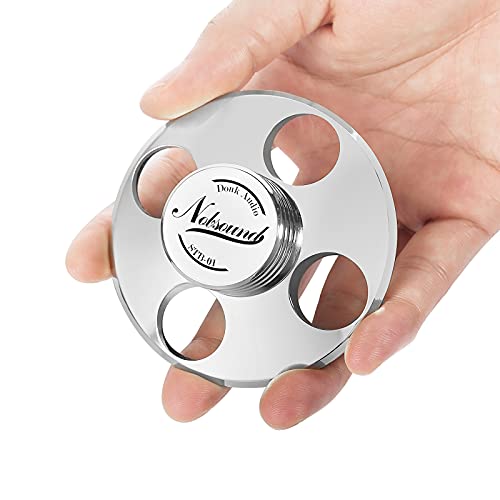 The record clamp certainly feels like some end-game equipment in terms of audiophilia, though there are even more ways to adapt and further this. There are, for example, such things as turntable rings that rest on the outer lip of a record, so as to meld it more to the whole movement of the turntable.

Of particular note are those made from stainless steel, doing the coupling with no questions asked and grounding warped records like it is nobody’s business. 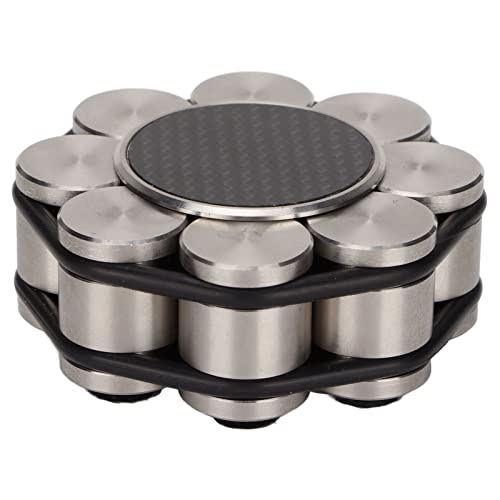 In a similar vein, and far farther on the spectrum, is such a thing as a turntable vacuum – a gadget that almost seeks to exhibit how important the stabilization of a disc is and likewise how far a resident audiophile might be willing to take such things in order to hear their favorite records properly.

Needless to say, these are far rarer and more expensive, literally sucking the disc to the turntable part – the platter, seeking to enact an equal amount of pressure across the whole surface of the disc and therefore ensure that the height and level of the disc is perfectly stabilized across the board.

Why Do you Need a Record Clamp?

In order to measure just how much a record clamp might be necessary for any of our own setups, we must outline some of the key benefits and benefits for using a record clamp in the first place.

This will undoubtedly not be for anyone, and some might in fact miss the effect of some of the innate antiquities and quirks that make listening to music on vinyl such a singular and sometimes hauntological experience.

The main selling point of a record clamp is the overall way that it can dampen the effect of extraneous vibrations on the listening experience. The record clamp does not just pack a clamp but is also weighed down, so as to use an additional mass on the record in question to reduce undesirable external vibrations that might otherwise interfere with the right motion of the stylus while the record is spinning during playback.

Any record collector who has been around the block at least a few times will have had to deal with the impact of external vibrations on the listening experience, where the movements of people in the listening room have been sent through and transmitted through the speakers alongside the music spinning.

The rumbling of heavy steps bearing upon turntable cartridge and tonearm will be all too familiar to some. A particularly friend of mine would always have such heavy footsteps in one particular first-floor room of my old house which was less than structurally sound. Chaos would oft ensue.

Thus, a record clamp’s main job is to tackle the effect that external influences can have on the overall sound of the record, seeking to dampen vibrations before they become a problem, acting as a barrier of sorts between the turntable and the outside world.

In ensuring a better point of contact between the vinyl and the turntable or record player platter atop which the stylus tracks the respective grooves, the record clamp intends to reduce these extraneous vibrations and in turn offer a way for cleaner playback which sidesteps the various distortions that such vibrations can bring about. 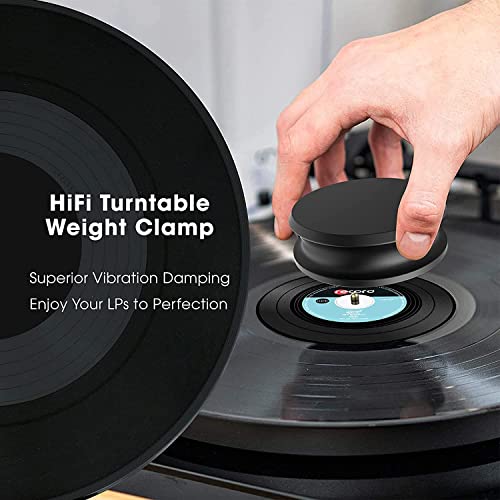 Most records will be just fine, but, depending on the center hole and how well it fits onto the pin-like spool at the center of the turntable platter, the disc might be susceptible to slipping out of the correct place. This can cause an inherent slipping of the pitch in and out of tune, usually to such an obvious degree that just about anyone could hear it; therefore, this will be unacceptable for an audiophile.

A record clamp seeks to have an influence on this, too, adding a mass and a steadfastness through the clamp itself that can notably reduce the risk of slippage like so. Such a small investment can also negate the need to purchase more expensive items to combat the issue, including but not limited to:

A specialized turntable mat that attempts to combat this very issue; a new record that will hopefully (but is not totally guaranteed to) have a more fitting hole at its center; or even an entirely new turntable, in the eventuality that this has become an epidemic issue throughout your entire record collection, or that you have somehow come across the one turntable whose member is slightly too big for the job.

This seems the obvious solution to an obvious problem that, as we say, just about anyone will be able to spot.

Intimately related to this idea of slippage is the notion of turntable speed, which can cause a similar pitch warbling effect when emitted through the speakers. This might be more familiar to you by the terms wow or flutter, where the pitch is rendered inconsistent by the turntable’s inability to produce a regular speed as a result of the inner drive mechanisms.

This is less common in direct drive vs belt drive turntables. The latter being inherently powered by, you guessed it, a belt inside, there is much room for error, especially when you know just how flimsy the belt inside is, and that it is basically a glorified elastic band.

Thus, it can very easily fall prey to degradation and decay, both of which can cause the turntable to flag in producing a consistent and reliable speed. This might not be so noticeable at first, but it is bound to exacerbate with further use or misuse.

In comes the record clamp, bolding attempting to go where no paraphernalia has gone before, adding a mass atop to your favorite records so as to improve the stability of the turntable platter’s speed. This, in theory, ensures that the platter spins at a more consistent rate and thus that the overall sound will be emitted at a more consistent pitch, as a result of this additional mass and force atop.

Physics certainly supports such claims, though the difference is going to be somewhat negligible at times. If the pitch warbling is not so obvious to begin with, then this is likely going to be an investment for those audiophiles for whom these issues are the fuel for paranoid and schizoid ramblings of a night which keep their lovers on the edge of their patience.

So, there you have it! Hopefully, this brief but beautifully comprehensive guide through what a record clamp is, why the record clamp exists and how it can be of use to you has been both inspiring and helpful.

Whether you now intend to invest in one yourself or not, you ought at least to be able to see how, if you were, it would be of esteemed benefit to you and the sanctity of your listening experience. If you are an audiophile who is privy to the various minutiae of music and sound technology, this is kind of a must-have.

What is a record clamp?

At its simplest and easiest to understand, a record clamp is a device that attempts to weigh down the record in question down during playback, so as to stabilize the disc while it is being operated and emitted through the stereo system. Though there are certainly a whole host of different products of this variety under a variety of different names, they all more or less do – or attempt to do – the same thing, as elucidated above. If you are a record collector who enjoys the finer details of the music you listen to, then this will likely be an indispensable piece of kit.

What is the difference between a record weight and a record clamp?

Though they are attempting to fulfill more or less the same purpose, they come at it from different angles. Where the record weight is more inclined to use its mass only to secure the record into place, the record clamp is likewise inclined to use a clamping mechanism to do the very same thing. The latter puts a fraction less strain on the turntable’s inner components, there being less mass on the delicate machinations within and without, but will also take a fraction more time to physically clamp onto the disc. So, both have their benefits and their drawbacks.

Are record weights worth it?

This is debatable, and you are likely to receive a whole host of different answers depending on who you ask (as well as you should). If you are a record collector who revels in the finer details, then the benefits of using a record weight or a record clamp will be abundantly clear whenever you use one during your own listening experience. If, however, you are not or perhaps are even inclined towards a fondness for the various shortcomings of the antiquated format, then a record clamp or record weight is not going to be the right investment for you.

How heavy should a record clamp be?

Answers to this will depend on who you ask and when, and ought also to depend on the size and weight of the record in question anyhow. A record clamp comes into its own when it is impressing additional weight onto a lighter record (such as those made in the original vinyl boom) whose original mass might need a bit of a boost to avoid some of the various shortcomings of the medium, such as the perviousness to external vibrations and pitch warbling. Records nowadays are usually pressed a lot thicker and are thus in less need of weighing down.