Join us in this exciting Victrola record player review and find out all you need to know about this record player, its features, and its pros and cons. So, let’s dive right in.

Believe it or not, the Victrola brand has a long history. And not only for the rivalry that has spawned in this second vinyl era between Crosley vs Victrola.

Rather, Victrola has been in the recording industry for at least a century. It was, in fact, there at the very beginning of the recording and phonographic technology. Something that Crosley certainly cannot attest to. Yes, they have most likely been constructing record players for longer than your grandparents have been alive.

In 1906, the Victor Talking Machine Company brought the magic of sound into the homes of the masses with their first turntable. They constructed phonographs independently until their acquisition by the Radio Corporation of America (or RCA). They continued to operate under the subsidiary that all fans of 70s music will have seen (RCA Victor).

Though you might not get the impression nowadays, it really was the largest and most prestigious firm of its kind in the world at the time. They are the original progenitors of the now iconic ‘His Master’s Voice’ trademark. Purporting that their ‘Victrola’ line of phonographs could play music very clearly. Even a dog would be fooled into thinking that they were actually hearing their ‘master,’ were their master to record their voice with such technology.

Working in conjunction with the original inventor of the gramophone as well as the disc-shaped record – Emile Berliner – Eldridge R. Johnson worked to his very exact specifications in manufacturing his inventions.

Being involved with the very first versions of the gramophone is no joke – this is the beginning of recording technology as we know it. So it is nice to see that Victrola is still going strong in this second vinyl era.

For such a small package, there really are a lot of features under the goods and outside. So we will do our best to outline each aspect carefully in this Victrola record player review. 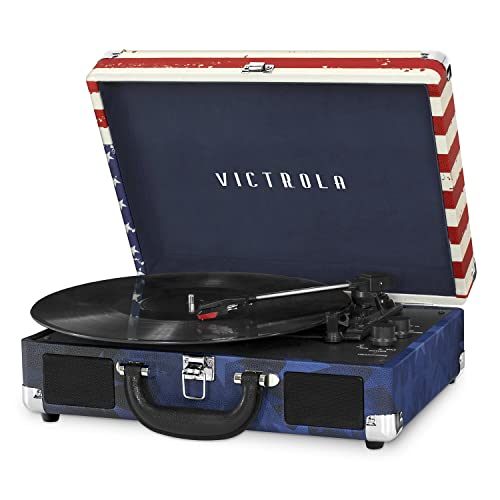 Being a portable turntable, you can expect it to come in its compact and transportable form. It has a carry handle that fits neatly in the hand, so you can easily move it around.

Considering the price point of many of these record players, this is rather durable. So you can safely knock this thing about and take it wherever you wish.

The number of design choices is really quite something to behold. Moreover, there is even the choice to grab it in a UK flag to mourn the loss of her Majesty the Queen.

Contrary to their very firm place in recording history, Victrola has equipped this vintage record player with Bluetooth capabilities, bringing the past into the present and taking both into the future.

This will very much appeal to the discerning millennial listener who does not want just to be limited to spinning discs. This type of listener wants to use the Victrola as an external Bluetooth speaker as well.

This is by no means going to be a great sound, but the party really is on you if you own one of these pieces of kit.

One of the key points of concern with a turntable is whether it is going to be able to absorb the countless small vibrations that are going on all around it and outside of it.

Most of you will already have seen this kind of thing in action. Where a friend gets a little too excited and walks or jumps too much while a record is spinning. This, of course, can send the needle flying off in one direction or another.

Granted, this is a relatively inexpensive option for listening to one’s vinyl records. But still, the shock absorption could have been a lot better.

There is not, for example, a mat of any kind to put onto the turntable platter. Being one of the most important parts of a turntable for connecting the needle and record, this is pretty damn unacceptable and surely should not fly, considering the history and reputation of this company.

Still, the Victrola here provides plenty of playback options, both in and out.

The headphone jack is a godsend for those wanting to enjoy some quality time with their records after dark.

Sure, you can send signals into the built-in speakers (this is a Bluetooth-enabled device, after all). But the real magic happens when you route the sound out through the RCA outputs, preferably into some powered speakers that are going to offer some serious audio performance.

Cheap record players, especially those in the suitcase style, are infamously rather quiet. They are transportable, do not fill out large spaces, and are the life of the party.

This will be fine enough if you are simply looking to use this in a bedroom or something. 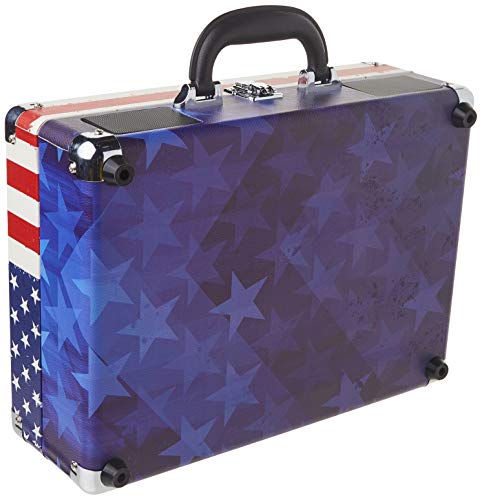 Still, you get what you pay for, really, and this is an incredibly affordable piece of junk. I cannot imagine anybody turning to this for audio fidelity. It should come as no surprise that this record player sounds distorted.

This latter speed is especially uncommon nowadays. This also seems to be more of a nod to Victrola’s past as a manufacturer of turntables.

In the early days of this kind of technology, manufacturers designed records to spin at 78 rpm. This was the speed that Emile Berliner himself calculated to be most effective for audio fidelity.

Now, this was at a time when records consisted of shellac as opposed to vinyl. A brittle and fragile material that did very little for the fidelity of the audio anyhow.

Thus, when vinyl records came about, the speeds could be slowed down. This was because the records themselves were made from a material that was more conducive to audio fidelity. This meant more sound could be fitted onto one record.

Those who are new to the hobby will like this function. This feature seeks to aid the user in precisely and safely cueing and lowering the needle onto the record.

Without guidance or assistance, this can very often lead to scratches deep into the surface of the record. So an auto-cue mechanism like this is a nice touch, especially considering how inexpensive the record player is overall.

It is nothing flashy, but it gets the job done, and that is all you can really ask from a record player of this variety.

There is a lot to love in the Victrola record player:

There are, however, a few things that you ought to consider before jumping right in and buying a Victrola suitcase:

It does not take long to realize that plenty of the suitcase models in this price range are very similar, if not exactly the same. So we thought we would include in this Victrola record player review a comparison between this turntable with a few others.

One look at the closely related Crosley Cruiser will tell you this for free, though you can just as easily see the similarities in their features and similar price points. 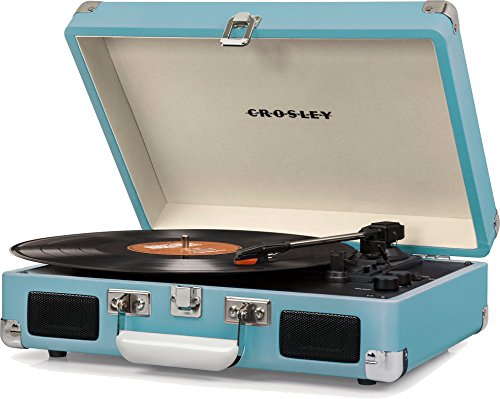 If you are working on even more of a budget, then you can always opt to use the Digitnow suitcase turntable, offering the same sort of features for a slightly lower price than the Victrola and Crosley.

The Jensen goes some better, however, planting its roots into the home environment; it is less portable but far better at delivering a stable and full sonic response from your records. 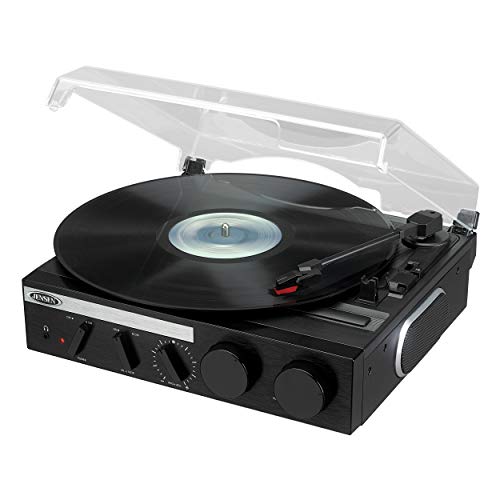 Which record player brand is best?

There is no one brand that trumps all others, rather, there are certain brands that are good for different things. Victrola and Crosley are certainly some of the most dependable options for those working within the constraints of a budget. Audio-Technica and the like are best for those with a little more experience.

Can you play vinyl records on a Victrola?

Indeed, you can play vinyl records on Victrola. In fact, this is what they are designed to do! Also, they are perfectly capable in a lot of other areas, Bluetooth compatible, and ready to party! The RCA outputs and headphone jack extend this connectivity forth outwards and inwards.

Does Victrola have good sound?

Not really, no, though there are a bunch of different models, so it would be hard to say for sure. The suitcase models are not exactly well known for their audio fidelity, though this can be remedied by replacing the cartridge that comes built-in from the factory, just as it can with its counterpart, Crosley Cruiser.

In terms of branding and marketing, I would say that Victrola is a good brand. It is hard not to be considering it was likely the first brand of its kind in the entire world, at the very foundation of phonographic recording technology at the turn of the 19th century.

Why does my Victrola record player skip?

Probably because it is not very good. The Victrola and Crosley suitcase models are especially bad at absorbing external vibrations from around the space within which they are playing. Thus, any large or dramatic movements occurring in the surrounding space are likely going to have an effect on the playback to the point where in some instances, the needle might skip.