Have you always been a little bit curious about what turntable pitch control is all about? Does your record player sound a bit distorted? Are you wanting to fine-tune your whole listening experience?

Then you are in the right place, for today, we will be delving into the concept of turntable pitch control as well as how to go about fine-tuning your pitch, whether you have pitch adjustment and/or a strobe or not!

Pitch is the frequency of an audio tone. However, you will find that these kinds of abstract concepts can be a little challenging to define sometimes.

In the long run, it might be easier to think of pitch as a frequency precisely because it is one! For example, the A note that concert musicians tune to will be registered at a frequency of 440 Hertz. This means that within the waveform of the note, 440 waves per second are produced.

You could see this more clearly if you had a diagram of the waveform that showed all the waves. The higher the pitch, the faster these waves will be traveling and the more of them there will be.

The range of human hearing goes from around 20 Hz to 20,000 Hz. This might seem like a lot, but many animals are susceptible to vibrations outside of this range, some even using vibrations of this kind to communicate with one another.

Elephants, for example, use something called infrasonic sound, projecting frequencies of around 14 Hz over long distances to warn other herds of incoming bad weather or stampedes.

Of course, elephants do not have to worry about the playback speed of their vinyl records when fed through a record player. Record players are the folly of humans playing records, worrying whether a record player is too fast. Those humans who just cannot bear to listen to a vinyl record without the correct pitch and sound quality will do their best to listen up now.

When referring to turntables, the pitch is the speed at which the turntable platter spins. Many may have noticed that their records sound different on some stereo setups than their own. Though the standard speed for records is meant to be 33 1/3 rpm or 45 rpm, some platters are guilty of spinning slower. These kinds of turntables need speed adjustment specific to the cause.

Yes, besides the very obvious differences between playing a 45 rpm record at 33 1/3 rpm and vice versa, there are issues relating to the specific sound of a record, which require the user to fine-tune the spinning to the right speed.

Thankfully, with a little know-how, most vinyl record types can be catered to.

Some Do, Some Do Not

Sadly, this is not the case for all record players or turntables. Some simply do not offer a very clear or obvious way to go about adjusting the pitch on a surface level.

Thankfully, this was more common in the earlier days of turntable manufacture, when companies like Victrola ruled the waves, so to speak.

This is, however, still sometimes the case, with some, supposedly, sleeker models that boast a minimalist aesthetic appearance negating the fine-tuning that some other models can offer. 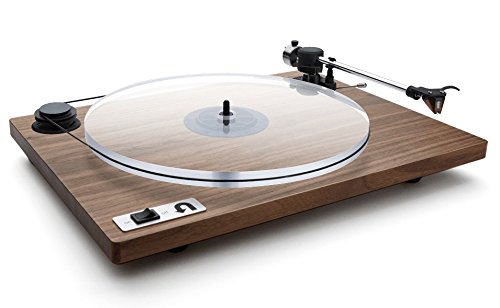 The U-Turn Orbit Plus, for instance, is guilty of this, discarding the ability to fine-tune the sound in favor of the more minimal appearance that seems to be trending among the seemingly-ceaseless hordes of newcomers to record collecting this side of the vinyl revival.

Most turntables, however, offer the opportunity to adjust the speed, even those who do not more obviously do so.

Why Are Pitch and Fine-Tuning Important?

With all of these grand words of praise, we might be asking ourselves why pitch and fine-tuning are at all important.

For some, they simply are not. It certainly makes things easier than fussing endlessly over something that is broadly inconsequential in the grand scheme of the universe.

This is something that ought to be obvious to all, however, at least in the more extreme cases where a record player is playing a record incredibly fast or incredibly slow, affecting the pitch high and low, respectively.

Seeing as the attitude of people to these things can vary wildly, it only makes sense to at least include a fairly obvious option for speed adjustment on most, if not all, turntables or record players.

As we say, though, these things are not necessarily that obvious until you, say, hear the album in question digitally or on a friend’s record player. Hearing it ‘properly’ in this way can make your own listening experiences pale in comparison.

So, if it was not already obvious, the importance is ultimately relative to the individual. Some will, for example, be affected deeply by even the smallest discrepancy in pitch. Inversely, others will not find this so much of an issue at all.

How to Adjust Pitch

This will depend on the turntable, so we will be addressing these three methods separately:

With Pitch Adjustment and Strobe

Follow these steps, and you can be safe in the knowledge that your turntable is spinning just right:

This should not be much more difficult, though it will require a more discerning ear than the eye:

Without Adjustment Control or Strobe

This will be a little trickier and, in some cases, might not actually be possible at all:

So, there you have it! Hopefully, you have learned all you need to know about turntable pitch control and how it works. Now you should be savvier about your turntable setup, how to navigate and take it by the reins, make it yours, and show it who is boss!

If you want to know more exciting facts about turntables, you can always delve deeper into the different parts of a turntable. There is always more to learn if this equipment piques your interest.

What is pitch control on a turntable?

Pitch control on a turntable is a method of controlling the pitch so that the record can be listened to as accurately as possible. This is not something that appears on all turntables. But rather on those that focus on the specifics of the sound.

Do I need pitch control on a turntable?

Whether you need pitch control on a turntable depends on the individual circumstances and attitudes of the user. Some, for example, are more precious about these kinds of things. Thus, will be far more inclined to believe that pitch control is an absolute necessity on a turntable. Those on the inverse will, however, not feel that this is too much of a necessity.

How do you set the pitch on a turntable?

If you want to set the pitch on a turntable, you must look at the kind of turntable you are working with. Some are equipped with pitch adjustment controls and a strobe that can allow you to fine-tune the speed at which the record spins. Thus, affecting the eventual pitch of the record. Some are less well-endowed. These will require screwing or unscrewing the potentiometer at the bottom of the turntable.

Why is my vinyl off-pitch?

Your vinyl can be off-pitch for a number of reasons. It could, for example, have to do with a warped record. Though it is more likely to be the preserve of the speed at which the record player is spinning. This can have a drastic effect on the overall pitch of the record. My turntable is slightly faster than 33 1/3 rpm, though I kind of like it this way as it offers a more novel listening experience.