Are you the proud owner of a fully automatic turntable that wants to advance by step to the next stage of audiophilia? Have you heard the whispers on the grapevine and want to find out a little more about semi-automatic turntables? Are you convinced they will take your listening experience to the next level?

Though they are not so established a brand in the turntable market, Dual has manufactured here a stellar piece of kit that is perfectly equipped to do justice to just about any kind of record you might see fit to greet it with. 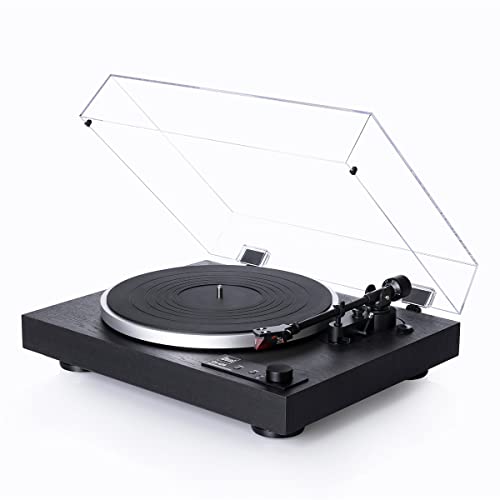 The sound quality is stellar, thanks in no small part to the quartz-stabilized direct-drive motor which ensures smooth playback with instant on and off starting, working in sync with the lubricated automatic operation to deliver a cohesive and comfortable user experience (and placing itself firmly on the former side of the great divide between direct drive vs belt drive turntables).

The plinth is sturdy enough to effectively ward off any unwanted noise, thus delivering an accurate sound and doing as much of a service to your vinyl collection as possible.

This is the kind of turntable that you are likely to have for a long time, the die-cast aluminum platter standing as a testament to its robust design and craftsmanship, as well as evincing its claim to provide smooth playback free of external interferences and distortion every time.

Another noteworthy component is the tonearm which features a patented Twin Gimbal design constructed from solid aluminum and a precision pivot ball-bearing. All of this combines to provide as stable a performance as possible that seeks to elide and evade each and every undesirable vibration to the best of its ability. And, if all of this was not enough, the tonearm’s parameters are incredibly adjustable!

Moving on to a company with a little more experience under its belt, we arrive at the well-established Thorens. This company has been at the helm of a curious and infallible movement in audiophilia to unite tradition and modernity and here we see a prime example of this mantra of theirs. 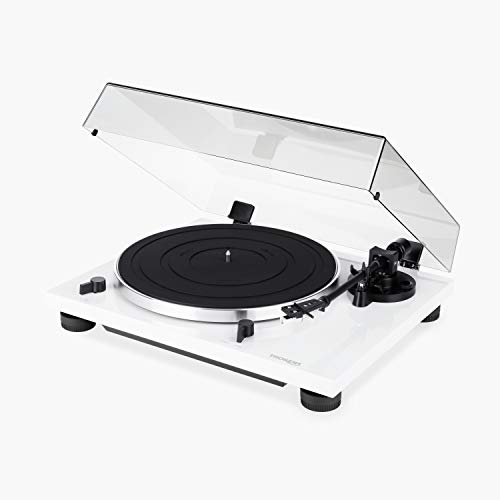 Their original turntable, the TF 124, was introduced as far back as 1957 and ‘has been used for decades in countless broadcast studios around the world’. The secret soon got out amongst audiophiles, however, and now Thorens find themselves at the behest of an ever-burgeoning listening public that only wants the best.

The sound response here is rounded and natural, though never at the expense of a crispness that gives it a certain bite over certain other competitors.

The build quality is similarly deep, both heavy and solid enough to send forth vibrations in the only way it knows how: boldly and beautifully.

The makeup is densely populated with shades of aluminum, well known among audiophiles to be a considerably advantageous material through which to send one’s favorite vibrations. Though this is a slightly more affordable turntable than the Dual, the attention to detail is no less prevalent!

For a sumptuous fusion of both modern and classic sensibilities, you can scarcely go wrong with this offering by Music Hall, an audiophile turntable brand who have been making quite a name for themselves of late with a series of carefully crafted and diligently stitched odes to the art of audio. 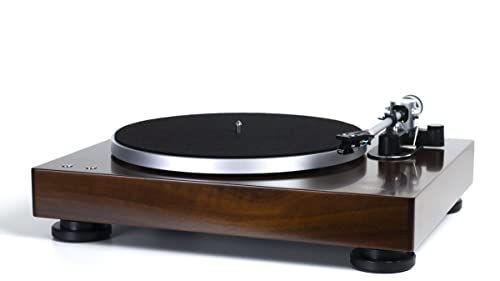 Unlike some of the other offerings on this list, the Music Hall Classic offers a phono preamp stage within its confines of considerable quality, one that is bound to send your listening experiences into the stratosphere, especially when combined with an audio system that you already own.

On the tonearm end of things, the Music Hall has you covered, with a patented Unipivot design that promises a precise tracking rid for flawless counterweight positioning, rid of any of the kind of hurt that might occur by the hand at the end of a cheaper tonearm – if the record player sounds distorted, seek immediate assistance!

As elsewhere, the Music Hall Classic clearly has the same idea as the others here listed in that it has opted to use an aluminum platter to act as a buffer to the vibrations above.

Denon is another brand with a long and storied history in the audio industry, having been a competitor in the manufacture of audio technology since 1910. They really amped things up a notch in the 1970s, when they first began producing quality record players, keeping pace with the most modern advancements ever since. 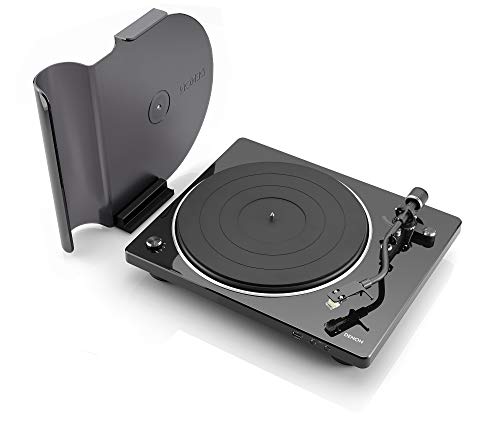 This turntable has it all, a fact seen evidently even in the smallest details. The weighted belt-driven platter is custom built to ensure the most accurate sound reproduction possible, aided by the S-shaped tonearm with an optimized tracking angle that mericlessly reduces any harmonic distortion that might occur during playback.

This tonearm is worthy of note compared to others in a similar price range even just for its opportunity for fine tuning and minor adjustments, the kind that make stinky the winky of the discerning ear.

Overall, the sound quality is rather exemplary, with barely-audible background noise that makes way for a full spectrum of tonal responses, clear highs, mids, and pronounced bass.

What to Look For

What are the Differences?

A manual turntable will be one that forces the user to be part of each step of the process of playing a record, including placing the needle on the record and then removing it from the record’s surface once it has done its business. This is easily the oldest style of a turntable and would have been the kind that first graced domestic environments throughout the western world.

Thus, a semi-automatic turntable will be one that occupies a liminal in-between space between these two. This typically comes in the form of a semi-automatic record player that will require the user to place the needle onto the surface of the record but that will then remove the needle automatically once the record is done spinning. This runs contrary to the mode of fully automatic turntables (such as those made by Audio-Technica) which are at the convenience of every part of the process.

Why use a Semi-Automatic?

There are a number of reasons a user might opt to use a semi-automatic turntable, regardless of their own experience with vinyl technology.

Above all else, it provides a more user-friendly way to spin vinyl records, a way to get into the business of it without fully committing. It is a matter of convenience for many, the idea bound up with curling up on a sofa to listen to one final side of music, wanting to do so while safe in the knowledge that if they decide not to get up again for the night, they will not be risking the sanctity of the disc.

Likewise, semi-automatic turntables are believed to offer better sound quality than their fully automatic counterparts. This makes sense even if you are only taking into account the automatic action of a tonearm when set into motion, the clicking of its mechanism as it tries to get it up.

But, why use a Semi-Automatic?

There are, of course, drawbacks to anything and this is no exception.

For all the convenience it offers, the tonearm will still need to be placed manually on the groove as in a manual turntable, something that more novice turntable enthusiasts might be loath to try just yet – it takes some practice, after all!

This, atop the fact that semi-automatic turntables are nowhere near as common as their manual and automatic counterparts, evincing the notion that there is rarely a middle ground to be struck between binaries of this kind.

Hopefully, this has been of some use to you in your attempts to navigate the sometimes confusing world of modern audiophilia. Perhaps you are now fixing and rearing to get your own semi-automatic turntable, so convinced are you that it will take your own listening experience to the next level!

What is a semi automatic turntable?

A manual turntable will be one that forces the user to be part of each step of the process of playing a record, including placing the needle on the record and then removing it from the record’s surface once it has done its business. An automatic turntable, then, is one that does not involve the user as much, providing them with the convenience of automatically convening the various steps of the process of playing a record. Thus, a semi-automatic turntable will be one that occupies a liminal in-between space between these two.

Are automatic or manual turntables better?

Neither is inherently better than the other; rather, I would argue that each is good for different things. For those who are just getting into record collecting and using a record player or turntable, then an automatic turntable is undoubtedly an easier route to take, providing the user with a more intuitive experience that is not going to leave the novice with a bad taste in their mouth. Inversely, the manual turntable will be best suited to those with a little more experience spinning discs, for they will be more used to using a turntable and handling a tonearm, and they will come to expect a higher fidelity from their turntable, the kind that a manual turntable can provide.

What’s the difference between an automatic and a semi automatic turntable?

An automatic turntable is one that does not involve the user as much, providing them with the convenience of automatically convening the various steps of the process of playing a record. A semi-automatic turntable will be one that comes in the form of a record player that will require the user to place the needle onto the surface of the record but that will then remove the needle automatically once the record is done spinning.

What is an automatic turntable?

Apparently so, yes. There is a mantra that is supposedly of universal importance within audiophile circles (and elsewhere for that matter), that less is more. An automatic turntable will inherently feature more components than a manual turntable even if only those pertaining to the automatic function of the tonearm. Thus, it is said that these extra components, no matter how they are placed or in what composition they are assembled, are going to cause an inherent drag on the audio fidelity. This is the kind of difference that will be of more importance to that so-called ‘discerning ear’ that is more often the reserve of a friendship’s group resident audiophile. If this is usually not too much of an issue for you, then the difference in sound response between a manual turntable and a semi-automatic turntable is not going to bother you so much.

What turntables have an auto return?