Looking to learn about this long and storied practice? What is crate digging? And how do you go about it? Can anyone crate dig? Where do you dig crates? And why, exactly?

All this and more today as we explore some of the reasons why crate digging has become so popular, why you might go about doing it yourself, and where exactly to look for the best deals.

Where to Go Crate Digging

As this is such a democratized art form, you can go crate digging just about anywhere that you can find records. The traditional idea of crate digging is that you take it back to how it used to be. Since records were initially presented in such crates, a crate digger will want to get down and dirty with these kinds of records. This will typically be in the bargain bin section of a store selling records or in cheap plastic crates beneath the display of newer records.

No matter the format, the important part seems to be the eschewing of the flashier display cases in favor of these old classic crates. The romantic notion is that they are often overflowing with records that no one quite wants or loved enough to keep. Hence why they are believed to harbor hidden gems, holding sounds unheard on other hip-hop producers’ beats. Being rare vinyl, there’s the notion that it will be so obscure as to be devoid of copyright issues and complaints of ownership.

Any good record stores worth their salt will have bargain sections like this running in tandem or parallel to the surface level of the store. These can usually be found in filling boxes and/or crates beneath the surface-level displays that are full of these kinds of more obscure used records. It’s very easy to miss them, in fact, as they are placed on the floor underneath the usual displays to maximize space, but their placement here should not act as an indicator of their overall value.

Records stores are not the only place you might go digging through the crates; essentially, anywhere that sells records is go for the act. Yard sales and boot sales or bazaars are ample for this kind of thing, littered as they are with all of the bits and bobs that people no longer want and are willing to sell for dirt cheap. Don’t be afraid to get creative with where you go crate digging! You can even get some of your own record crates for around the house!

How to Go Crate Digging

This is an area still ripe for the democracy and agency of the consumer, so there is no one holistic way to go crate digging. If modern hip-hop production has taught us anything, it is that anything goes. However, there are a few things you can do to clue yourself up enough that you might improve your chances of stumbling across some hidden gold.

Simply knowing your craft as much as possible will guarantee you are at least making more well-informed choices out in the field. Even when you are just buying from the usual record displays, you are doing so with your head screwed on. This means scanning all of the information on old records and coming to learn through the liner notes a number of usual suspects whose presence on a recording tends to indicate goodness.

Though part of the fun of crate digging is the sheer randomness of it all, most record stores will tend to have an in-house turntable that you can use to check the contents of a record in question. When I am record shopping, what with the advent of other technologies, I tend to search for a record on my phone and listen briefly before making a decision. You will often come across records that you can’t even find a trace of on the internet, so using the turntable in the record store might prove the only way of getting a sneaky preview.

Many of the best music producers looking for obscure samples won’t sample the goods but will simply know exactly what to look for, certain indicators telling them whether or not to buy a record. You, as a crate digger, will want to and will eventually develop your own intuitive internal language around it based on various successes and failures in the field of investing in rare records.

While it is best for us all to, as we say, develop that internal language of intuition and guesswork that makes crate digging so enjoyable, here are a few tips to get you started. 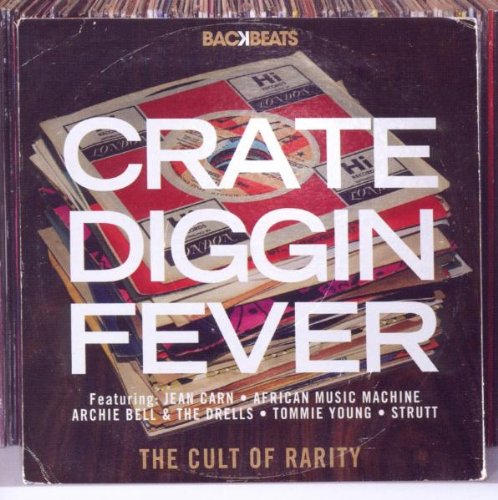 As with anything, there are a fairly common set of standard procedures in the realm of the record shop. Again, as with many anthropological and sociological rites, these go largely unspoken, though it is perhaps useful to elucidate them all here for you, so you do not make the mistake of crossing them.

The main thing, above all, is to respect the records, something that younger producers sometimes have yet to learn. Even if it is no use to you, it might find a loving home in someone else’s arms, so treat it with as much respect as you would expect an amazing record of your own to be treated.

Another is to give yourself plenty of time and not rush anyone. This means that you should not really bring a friend or lover unless they are also interested in collecting records.

Checking new arrivals is a great way to ensure you get a leg up on other crate diggers also operating around you at the same time.

One of the main things to avoid in this internet age is checking prices online. Even if you feel you absolutely have to check out Discogs, as it is one of the best online vinyl stores, do so out of the sight of the owners. Such acts can be a rather hurtful reminder of the rapidly accelerating pace of the capital.

You should not have to ask for a discount. If you have a rapport with the owner or they think highly of you (or if you buy enough records), then they will automatically give you one.

Even if you do not intend to make beats from the records you end up purchasing, you have to admit that buying records in this way is an altogether more personal experience.

We do live in an age of internet consumerism, and there are certainly several esteemed benefits to purchasing in such a way. We might be able to instantly check out the prices of a record in several different places simultaneously thanks to services like Discogs.

As a strong advocate of Discogs, I find it hard to deny its strengths. However, it is modes of consumerism like this that are killing off independent sellers on the high street today. It seems only right and just that an independent presence is felt in every town, giving voice to those who do not feel spoken for by the conglomerate elite.

Politics aside, the record store (including its record convention and flea markets relatives) is easily the most immediate way to purchase records. What the internet misses is the ecstasy of human communion that being in a record store surrounded by record collectors and the rich aroma of old records can bring about.

There, you are free to ask whatever questions you like about a record, to revel in a particular artist, to exchange the music you have been listening to, and even to get a discount if you are a regular customer.

So, there you have it! Hopefully, you are feeling a little more in the know about crate digging and what it entails. Perhaps you are even feeling inspired to go dig some crates of your own!

Where can I dig a crate?

You can go crate digging just about anywhere you can buy records normally. Most record stores will have an underside to them, a bargain section that runs parallel to its newer releases. These will tend to be housed underneath the usual displays. While a lot of the stuff in bargain sections like this is there for a reason, you will every so often come across some hidden gold for a dirt-cheap price. And so it goes, the magic of crate digging.

What does crate digging mean in music?

To crate dig is to go record shopping in search of especially rare finds. These are usually found in the crates that lurk below the regular stacks of records in a record store, hence why it is known as crate digging. This practice has taken on real prominence with the rise of hip-hop and the subsequent sanctioning of copyrighting and sampling usage. Producers want to find the next big sample lurking amidst all of the junk in these crates, and so they spend hours upon hours searching.

What is crate music?

Crate music is a term used to describe music made from samples of an incredibly rare origin. This term is sometimes used interchangeably with the term Sampledelia, and they do more or less mean the same thing. Crate digging is a practice exercised by producers and record collectors wherein they scour the bargain bins and junk crates of record stores and such in an effort to find rare records. Producers will then lift samples from these records so that they can have the next big sample ahead of their producer friends who also will not be as privy to copyright claims.

What do you look for when digging a crate?

To dig a crate is to search a bargain crate for lost gold. This lost gold will come in the form of a rare vinyl record. Producers will often exercise such a practice in an attempt to find a sample that none of their other producer friends have yet heard. Also, as copyright laws plague popular music ever more each day, this practice helps a producer to ensure that they do not need to pay as much in order to use the sample in a popular production.

The 7 Best Jazz Vinyls that You Must Own

Is Your Record Player Too Fast? [How To Diagnose And Fix It]

Best Sounding Vinyl Records of All Time You Would Love

Can Vinyl Records Be Recycled ? An Honest Guide!

How to Ground a Turntable – 5 Easy Steps